Finally we are almost caught up to our current location (Florence. We are in Florence right now after 12 days of work on an olive and honey farm in the Tuscan hills). Matt left off just as we were departing France, and now after a long hiatus of only occasional input, I am going to help write this damn blog again. Expect a lot more exclamation points and asides!!!

Italy might be my favorite place we have been so far. Everywhere is wonderful and interesting of course, but when it comes to food, wine, art history, and natural beauty, Italy is very hard to match. The fact that Italy was so many independent states with unique food and wine production, culinary traditions, and artistic styles for so much of history makes the country so very culturally rich. I mean, it would take YEARS to try all the different wines and cheeses produced in every region of the country (but hey, I am more than willing to try!).

We arrived into Italy via train from Nice (it was raining again) and then cycled along the Ligurian Coast from Ventimiglia to Genoa. Like magic, after an hour or two of cycling in the rain and wind, the sun came out and the rain stopped. We could finally look up and out to a sparkling sapphire ocean, verdant forests of cypress and conifers, and near-crumbling Roman bridge and road remains hugging the cliffs above the sea. Holy cow, it was just SO BEAUTIFUL!! As  Northern Californians, we are no strangers to cycling on cliffs over the ocean; but the unique flora of Italy, along with the historic remains of roads, castles, and bridges is just so mind blowing. Not to mention- Italian cyclists are so friendly! We got so much “Ciao!” and “Buona Fortuna!” from our spandex-clad fellows on the road, that we couldn’t help but feel encouraged to keep going. And that first meal along the ocean in Italy… well, we should get to some pictures here : )

Beautiful Ligurian towns with, ya know, just some palatial churches from the XII century. 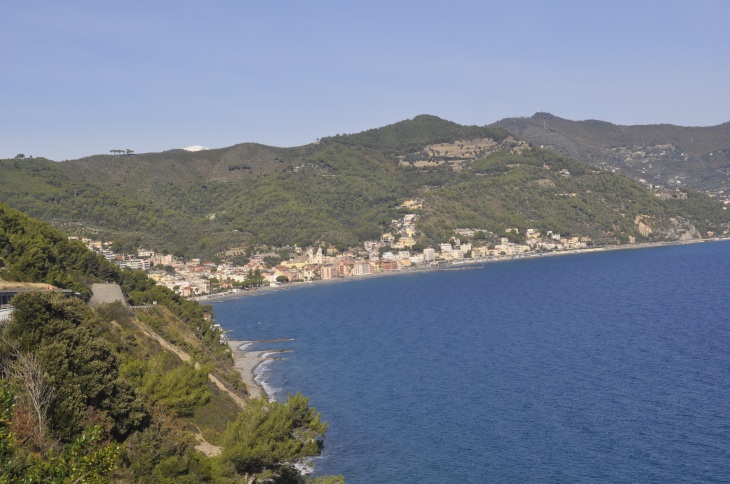 Oh what’s that you say? You’d like some snow-covered Alps views along with the ocean and forests? Ok. 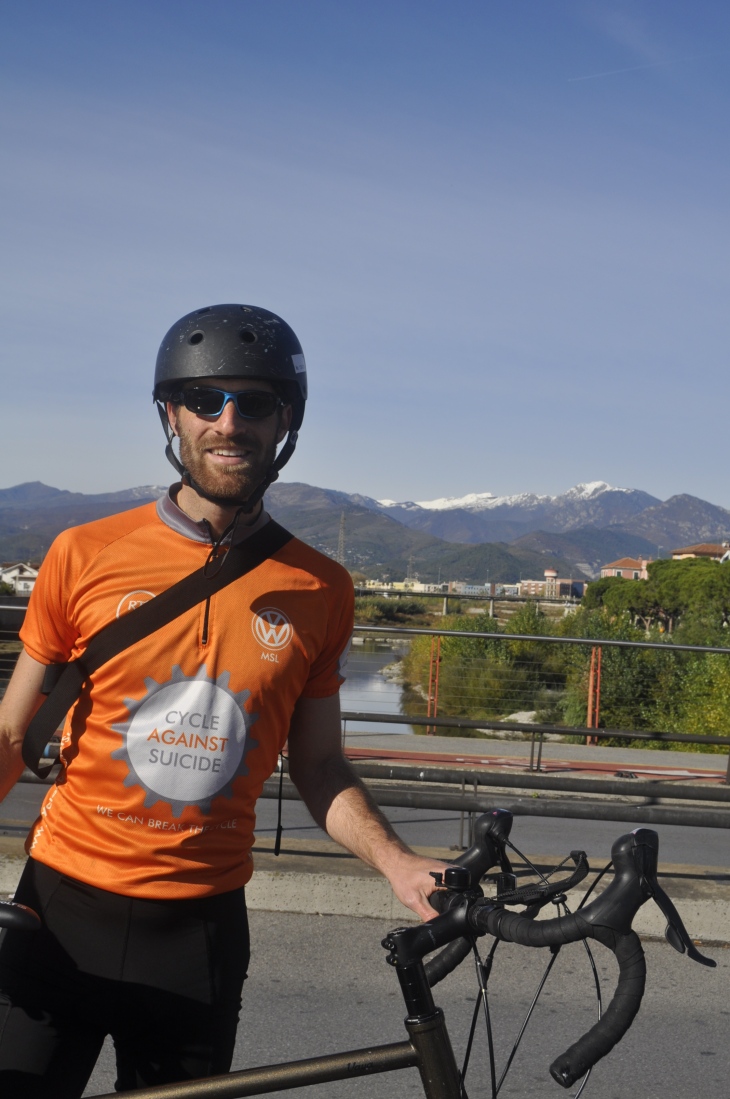 Matt contemplates the deliciousness of his first beer after we’ve arrived in Italy. Italian beer is surprisingly delicious and not lager-y.

After just one and a third day of cycling, and a brief and easy Tren Italia ride (we only took the train because we got so caught up in the beautiful sunset over the Mediterranean Sea, and then it was too dark to keep going), we arrived in Genoa!! It’s a beautiful and bustling port city, and the capital of Liguria. Jam packed with nearly untouched Medieval structures, some of the most ethnically diverse neighborhoods we’ve been in all of Europe, and uniquely narrow and winding streets- Genoa is striking. As you may know, Genoa is the home of pesto, but that is the tip of the iceberg with Ligurian food… oh man- the food and wine in Genoa!!!

We were so lucky to have met Paola, an awesome Warm Showers connected bicycle tourist from Genoa while we were in Copenhagen (with our awesome Copenhagen hosts… we love Warm Showers!!!), and she opened up her home to us in Genoa AND taught us how to make fresh pasta with pesto! What a rad lady. Also, her home is a historic building from around 1100, with a tower you can climb up in to see a sweeping panoramic view of Genoa (!!!)  Ok, I could go ON and ON about Genoa (the historic port, the cool Ligurian flag, the churches with frescoes by the most important European master artists of the pre-Renaissance period) and our great hostess (she rides a motorbike! She bicycles into the hills and then climbs trees to pick olives!), but let’s get to the pictures 😉

The view of Genoa from Paola’s historic tower, including the port…

… and the other side, including the mountains

On top of Genoa!

Paola teaches me how to make legit fresh pasta. She’s like, “No girl, roll it like THIS.”

Matt grinds traditional Genovese pesto in the mortar and pestle.

Me and Paola walking the narrow and ancient streets of Genova

Genovese street market, where we got the most delicious wine that I am still dreaming about… 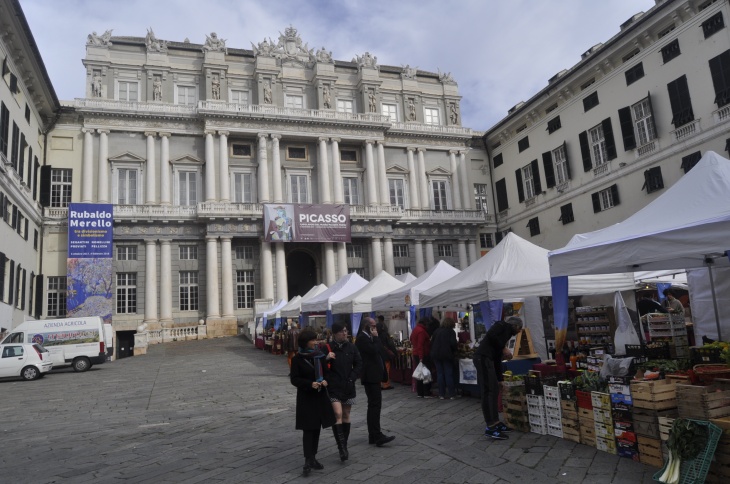 The  inside of Ducal Palace of Genoa. 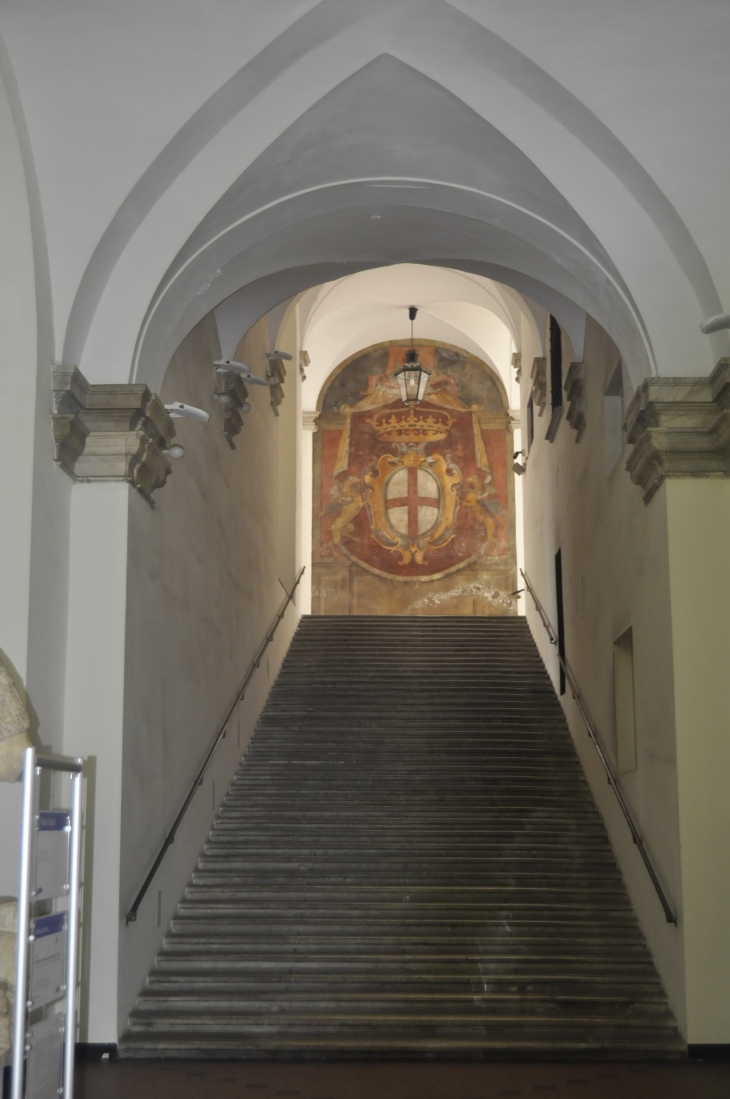 Exterior of the Ducal Palace- a notable feature is the sculptures up top (hard to see from this picture) of defeated enemy generals and leaders, depicted in chains… wow, way to rub it in?

Another angle from inside the palace.

Down by the port 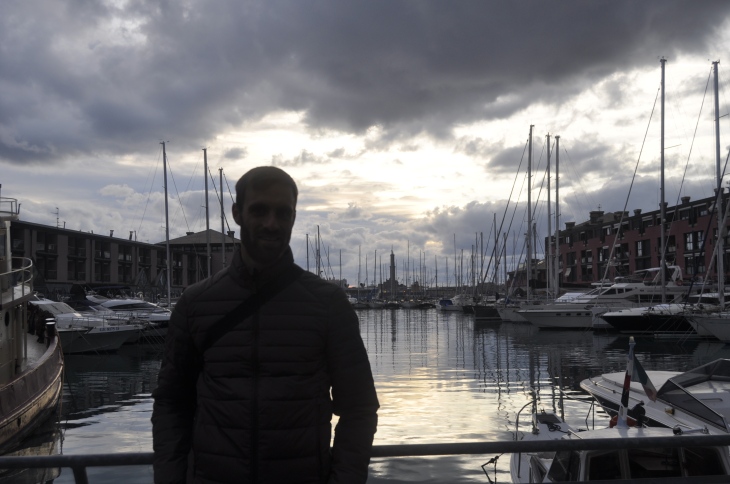 My mom’s (hi Mom!!!) friend and student, Daniela, is from Turin/ Torino; and my mom was like, “If you go to Torino, Daniela will hook you UP.” We are so very happy that we took a day and a half trip to Torino, to experience the beautiful city, Piemontese cuisine and wine (word to the wise: drink Barbera di Montepulciano, you will not be sorry), and get shown around and hosted by Daniela’s wonderful and fun friends! Wow, where can I start to describe wonderful Torino? It’s really, really difficult to do this, because our gracious and generous host for the day, Francesco, literally showed us the whole city! We feel like we know everything about Torino now (not really, that’s impossible!) so I will try to edit: A majestic, stately city with over 16 km of pillared arcades covering the sidewalks, Torino boasts a gateway to the underworld, an intact WWI-era submarine, Roman wall remains, and the Italian Museo di Cinema. Torino used to be the capital of Italy,the first few years it was unified as a country, and it certainly shows. You have gorgeous tower spires, mansions, open squares, and lovely public art (we were lucky to catch the Luci Di Artista- public art festival of lights!). Torino is also home to famous Piemontese dishes and chocolates (Gianduiotto, hazelnut and chocolate mixture, was born here!). No wonder Primo Levi, Di Chirico, Nietzsche, and the folks who made Fiat decided to be there. Again, time to stop gushing and share pictures.

This is either the white portal or the black portal of Tornio… two nearly identical monuments in different parts of the city that will lead to heaven or hell. The angel has an inverted pentagram on it’s head…wooooo……….

The stately arcades of Torino 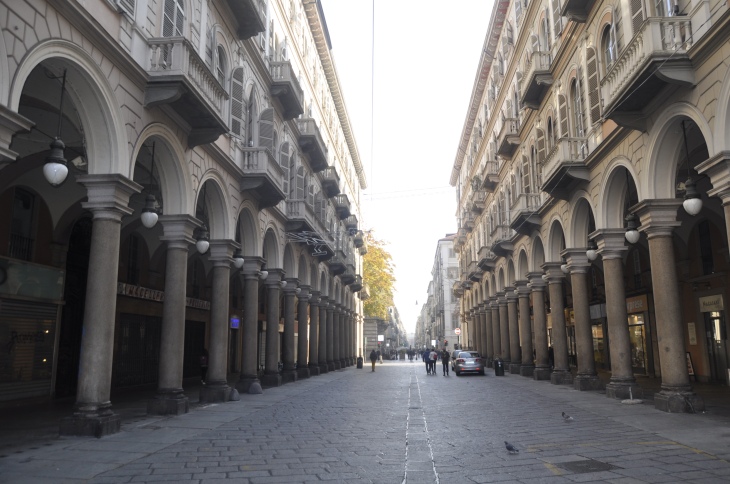 Our fantastic host for the day, Francesco, taught us SO much about Torino and treated us to some delicious treats too!

Santuario Basilica La Consolata -not the only famous church of Torino, but certainly the most ornate- the outside shows no sign of the dazzling Baroque interiors- as Francesco said, there is not a corner of this church that is un-decorated! 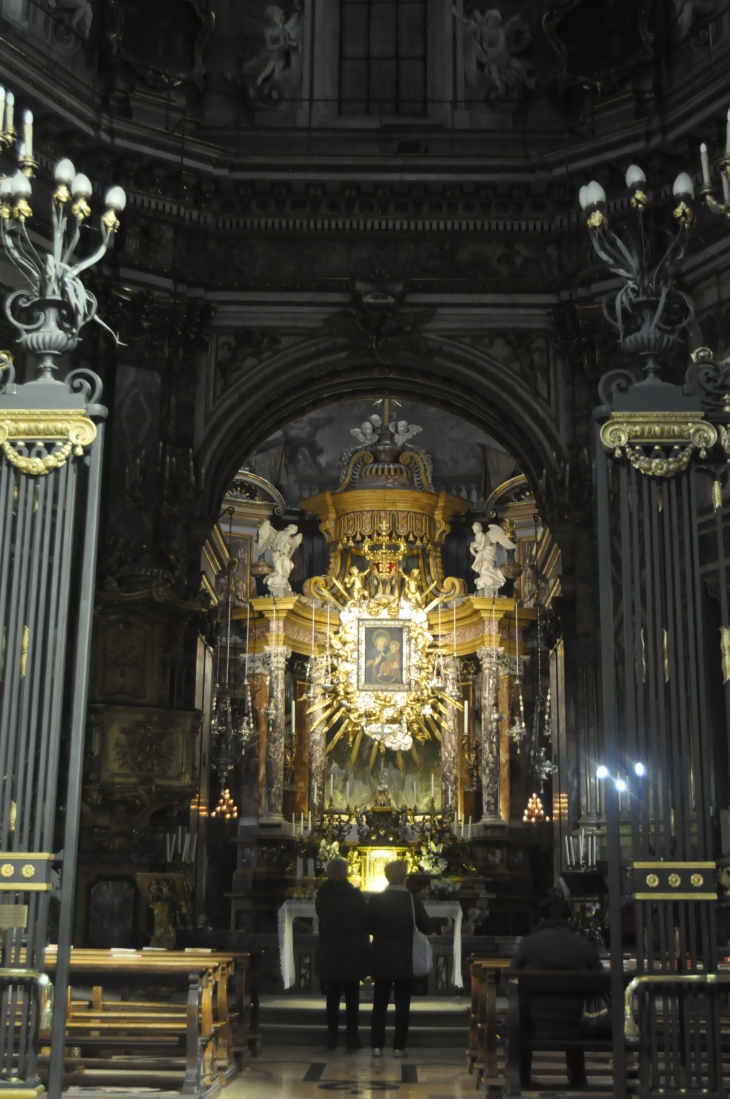 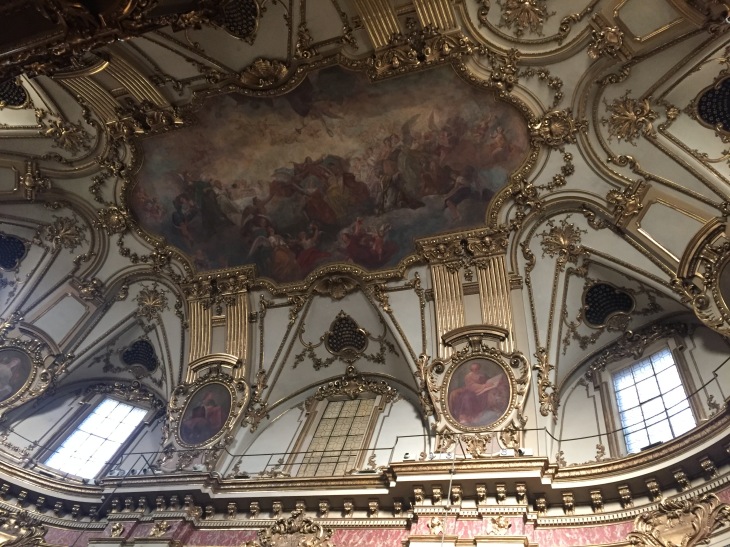 This was really interesting, and perhaps unique to this particular church- when people’s prayers were answered in surviving illness, accidents, and war, or they felt granted salvation from such disasters, they would send a picture of the incident they or their loved one was saved from, which are hung on the wall. This example is surviving getting hit by a car while scootering….

and there are hundreds of others!

Drinking a brilliant Torino invention- the bicherino is three layers of hot chocolate, espresso, and whipped cream on top. It’s as delicious as it sounds (and look at me, I needed it).

The Palatine Towers and Gate- built in 1st century AD, this is primary evidence of Torino’s Roman Period- and is one of the best-preserved relics from this time period in the whole world! I believe the towers were used as a prison too, at some point 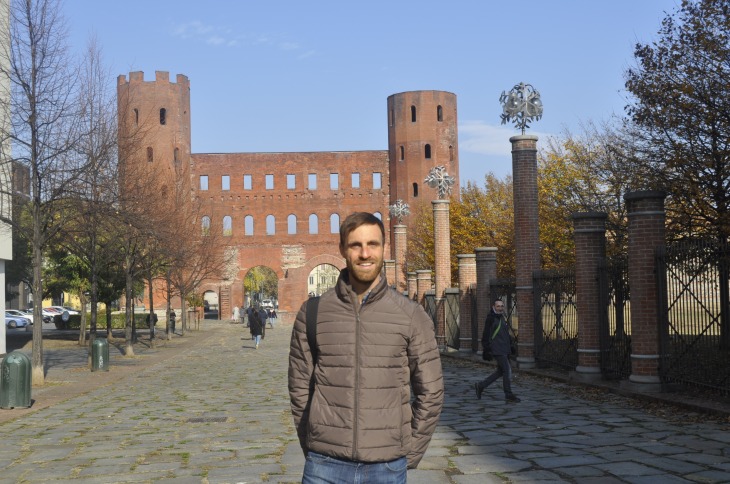 Err… I forget who this is- It might be Emperor Ottaviano Augusto or Julius Caesar. Come on you guys, we can’t remember EVERYTHING.

More Roman wall ruins (I love Roman Ruins! There is nothing this old at home)

Grand square in Torino, with view of the Big Mother Dome (Grande Mama)

Bridge over the River Po

Looking up from the submarine cabin… not very scenic. 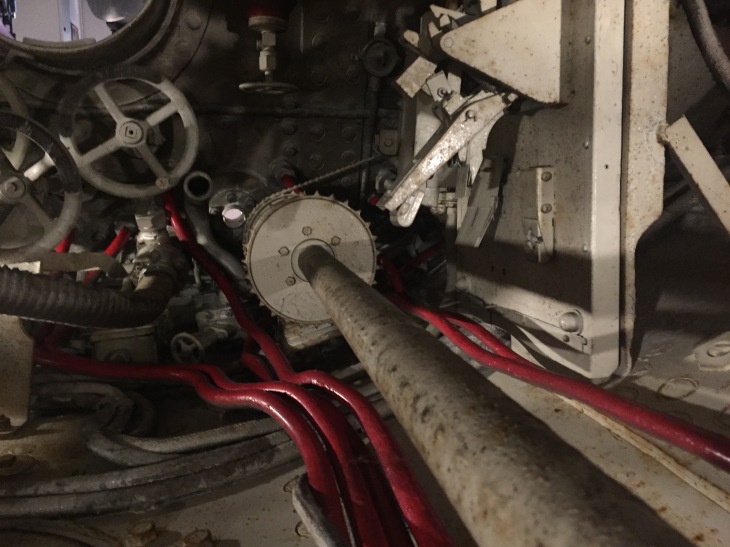 Fiat is from here

A beautiful display from the Lucia Di Artista

More beautiful lights! These are all the constellations.

Daniela’s friends took us for a wonderful Piemontese dinner! These guys are super fun and know good food and wine (so, winners in my book). They also were telling clever jokes in Italian all night which makes me wish we knew more Italian.

This antipasti plate has  Piemontese beef tartare with onion marmalade, a vegetable flan, veal with tuna sauce, beans in tomato sauce, and prosciutto on toast. Everything was delicious. Dieters and vegetarians might want to un-follow this blog. 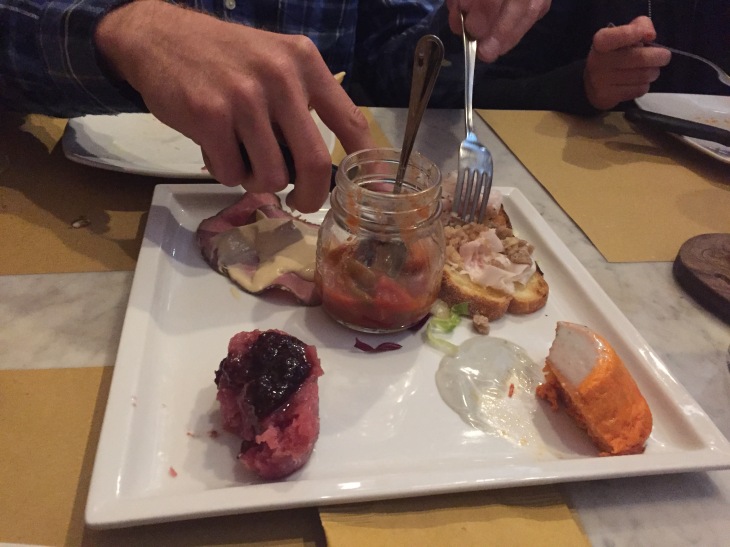 This is a Piemontese ravioli, filled with game meats. Do I really need to keep telling you that these were delicious? 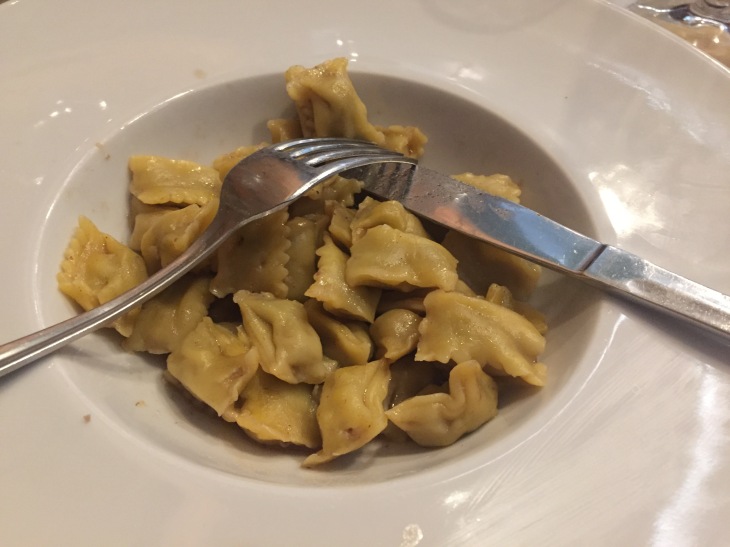 After that monumental dinner, we had to walk! Paola shows us how to get good luck by touching this guy’s finger… 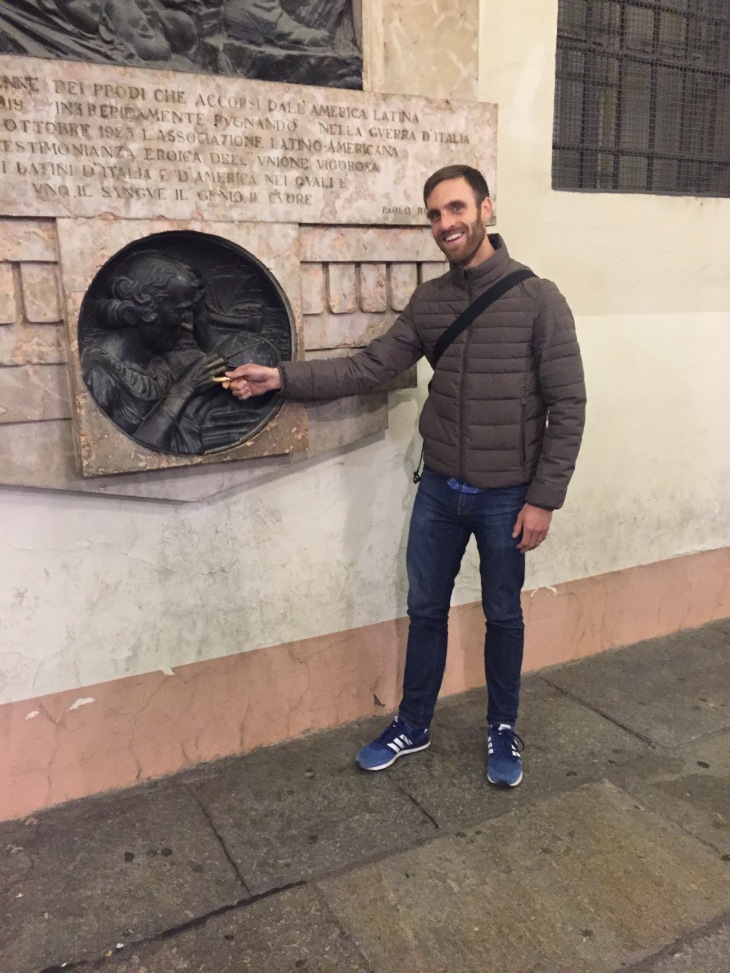 The Museo di Cinema! Italy has a rich film history, and this museum is appropriately grand. Actually, this lavish building was meant to be a synagogue, but the architect who was hired for the project went waaay over budget and off track from the original plan. The congregation was like, hell no we are not paying for that. So now it’s a museum with a viewpoint tower.

The museum has an amazing collection of the earliest moving images- here are some sets of early animations that could be viewed on a moving, circular reel.

This is a blown up image of  Alfred Hitchcock’s first revision of Psycho (!!) I fangirled out 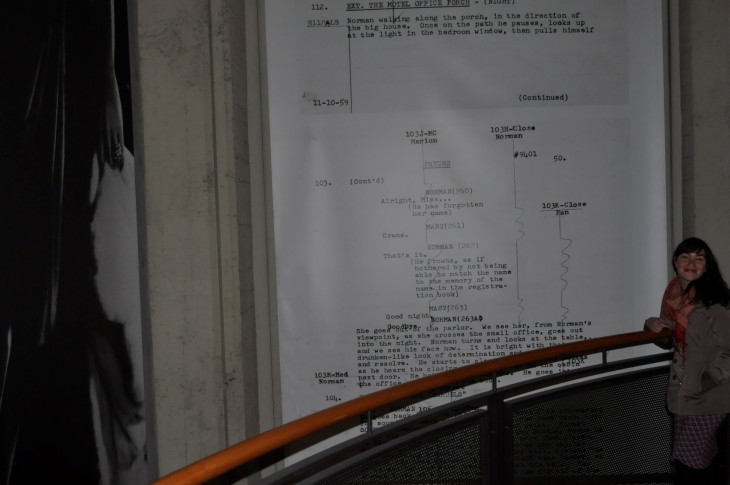 These are masks from early monster movies! In the glass case reflection you can see Bela Lugosi as Dracula playing on one of many screens in the museum…

Like this! This was the horror screen- it played scenes from The Exorcist, Psycho, Suspiria, Dracula, and Psycho on a loop. Matt had to drag me away.

A view of the museum, looking up the elevator’s pathway… 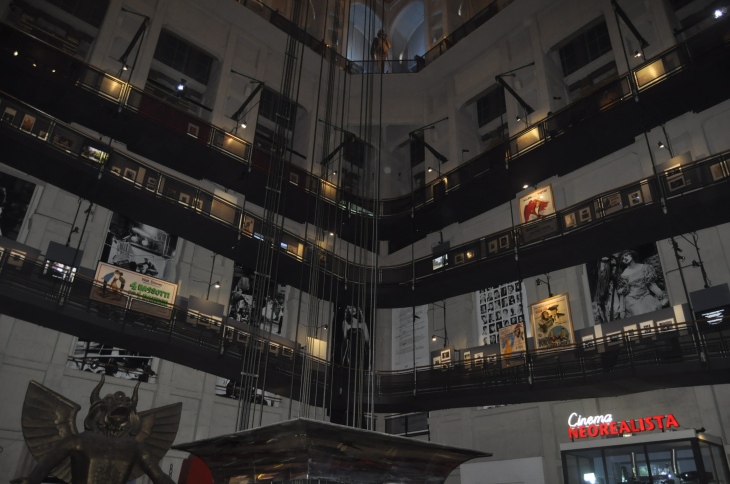 …which leads to this breathtaking view of Torino, surrounded by the Alps!!! 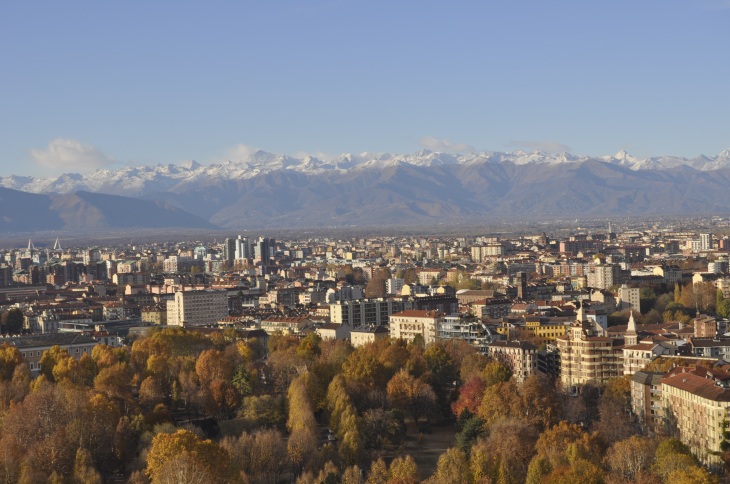 Ok, let’s end this post on possibly THE MOST BEAUTIFUL PLACE WE HAVE EVER BEEN IN OUR WHOLE LIVES!!! Have you heard of Cinque Terre? It is a series of  ancient towns along the Ligurian Coast connected by a hiking trail- breathtaking cliffs above the sea, vineyards… and…oh my gosh just look!!! 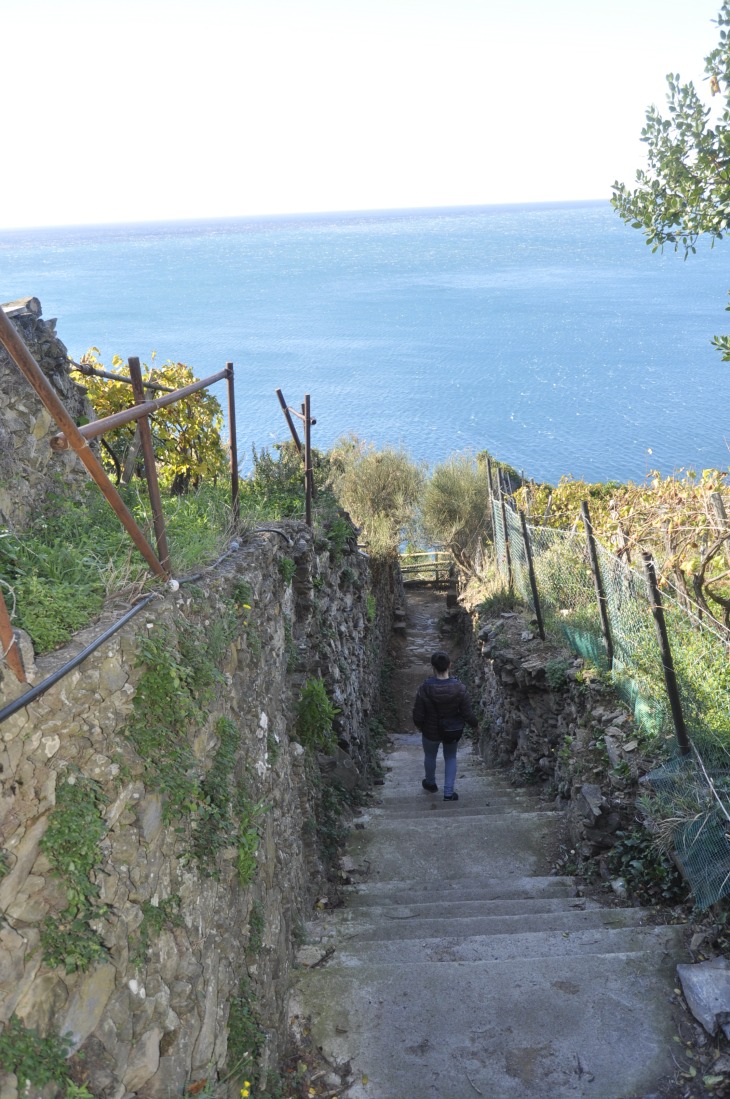 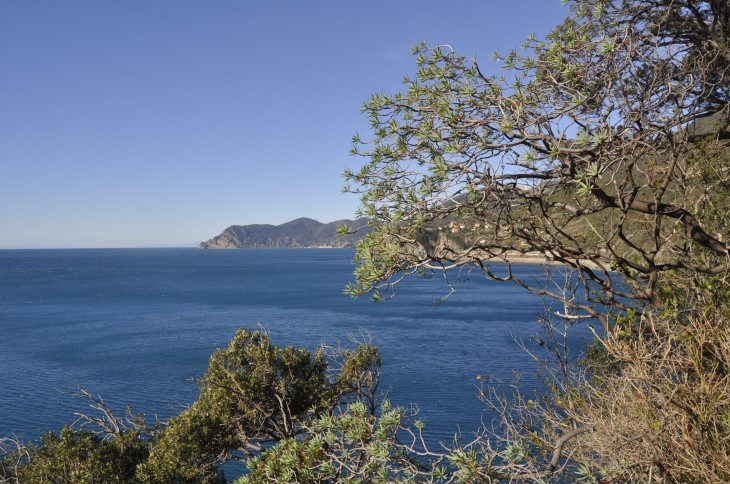 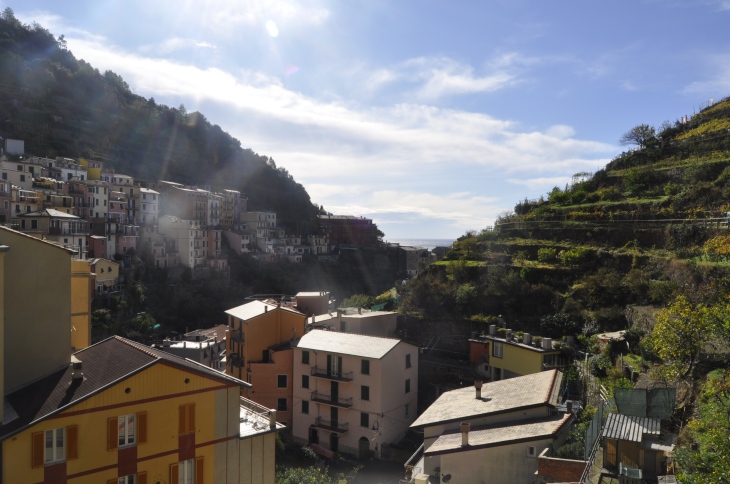 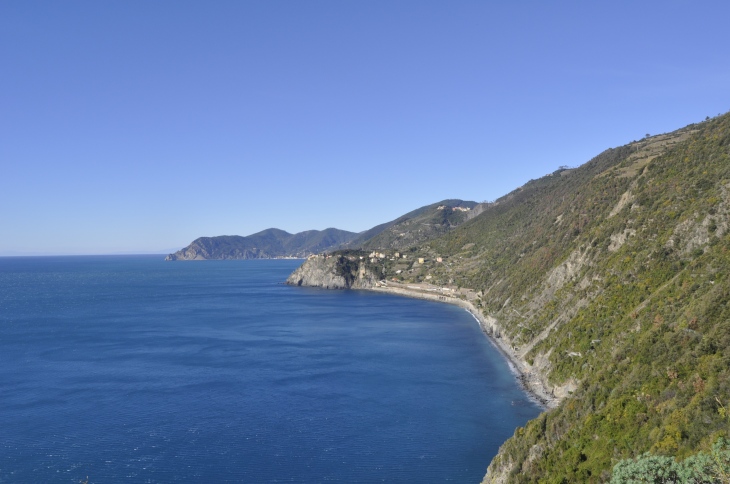 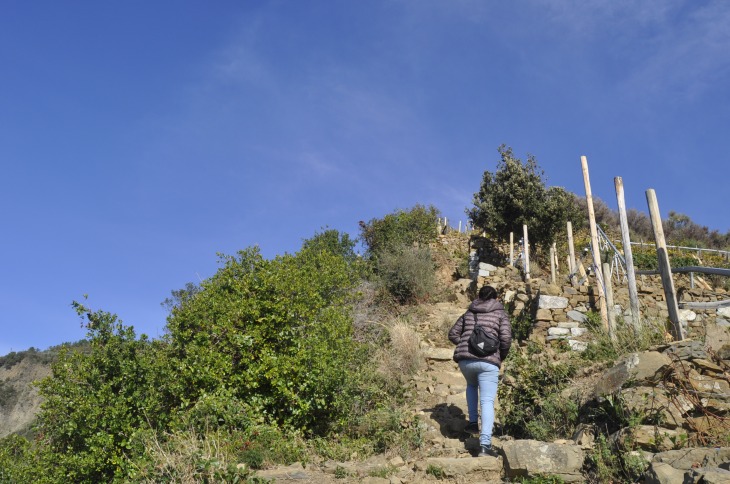 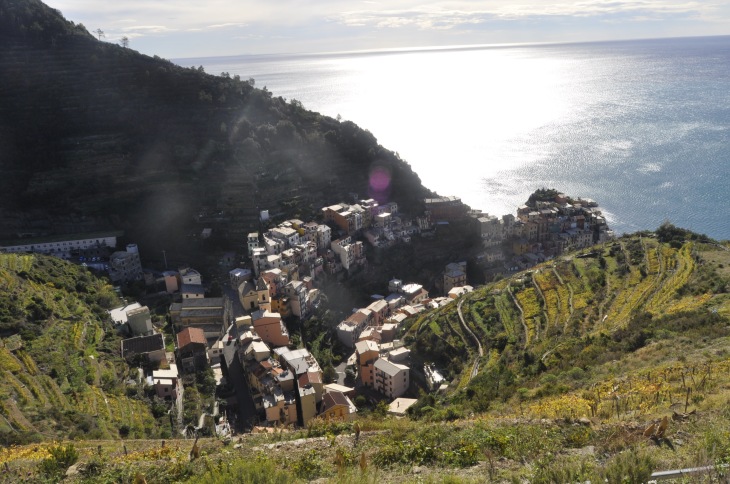 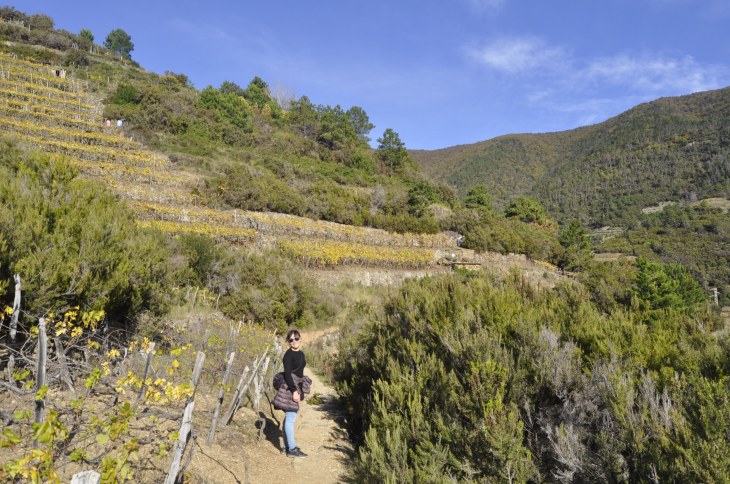 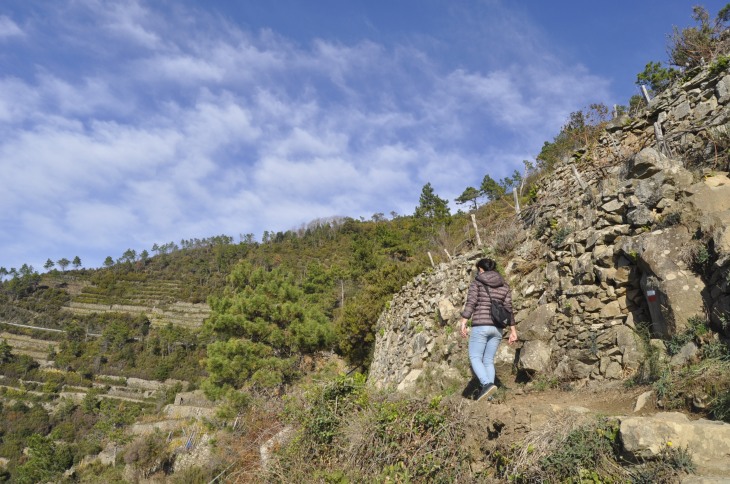 View all posts by mattandarieurosafari

We will be traveling around Europe for five months this August-December!  We will post musings, reflections, and photos here.